A Cosmic Filament Illuminated by the Cosmic Microwave Background – by Prof. Adam Hincks

Only a small fraction of baryons today are found in galaxies. In
fact, for many years ~30–40% of the baryonic matter predicted to exist by
early universe cosmology were unaccounted for in censuses of observable
baryons. It is now becoming clear that they must be in a diffuse, warm–hot
intergalactic medium (WHIM) outside of galaxy clusters, particuarly in the
filaments of the cosmic web. I will describe a recent measurement that
reveals this component of our Universe in a single filament between two
galaxy clusters, using the cosmic microwave background (CMB) as a
“backlight” that scatters off of the gas (the Sunyaev-Zeldovich effect).
Our data come from the Planck satellite, the Atacama Cosmology Telescope
and the MUSTANG-2 camera on the Green Bank Telescope. Finally, by
combining our results with optical and X-ray measurements, we have been
able to probe the density and dynamics of this remarkable, pre-merger
cluster system.

The Crab Pulsar’s radio emission is unusual, consisting predominantly of
giant pulses, with durations of about a micro-second but structure down
to the nano-second level, and extreme brightness temperatures.  It is
unclear how giant pulses are produced, but they likely originate near
the pulsar’s light cylinder, where corotating plasma approaches the
speed of light.  I discuss observations where we use scattering in the
Crab nebula to resolve the emission region, showing that the giant
pulses originate in an extended emission region.  We suggest that the
simplest explanation for being able to resolve the emission region is
(apparent) superluminal motion, and infer that the plasma producing the
giant pulses moves highly relativistically, with a Lorentz factor of
about 10000. 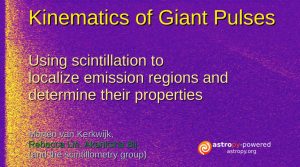