This links to a document

University of Toronto Astronomy Professor Roberto Abraham has won the 2023 Jackson-Gwilt Medal for his innovative work on the Dragonfly Telephoto Array.

Abraham is a Professor and Chair of the David A. Dunlap Department of Astronomy and Astrophysics

, as well as an Associate at the Dunlap Institute for Astronomy & Astrophysics. He shares the award with his co-principal investigator, Professor Pieter van Dokkum

The Dragonfly Telephoto Array is an innovative optical design that uses clusters of Canon lenses to build up a wide-field large aperture telescope. It was designed particularly to take pictures of large and faint structures in the night sky. Its filters minimize stray light, which helps it to achieve an unprecedented sensitivity to low surface brightness features. 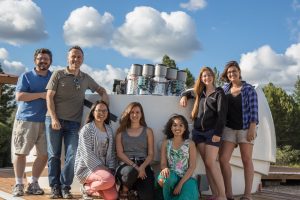 This links to a document

van Dokkum and Abraham, along with their research teams, began designing the telescope in 2013, starting with just three Canon lenses. Dragonfly now has 78 lenses and is expected to expand to 168 lenses within the next year. The professors’ work has contributed greatly to understanding galaxy evolution, as well as shedding light on the nature of dark matter. Discoveries made with the telescope include a new population of ultra-diffuse galaxies, and very extended galaxy halos around nearby galaxies.

The award announcement was made today at the Ordinary Meeting of the Society.

“It is a tremendous honour to receive this award,” says Abraham. “Previous honourees include some of my astronomical heroes, stretching back over a hundred years. It’s especially cool to be awarded the same medal that Clyde Tombaugh got for discovering Pluto – I don’t care what anybody says, that thing is still a planet in my book!”

The Jackson-Gwilt Medal is awarded for “outstanding invention, improvement, or development of astronomical or geophysical instrumentation or techniques.” It’s been issued by the Royal Astronomical Society (RAS) since 1897.